We use cookies to make your experience better. To comply with the new e-Privacy directive, we need to ask for your consent to set the cookies. Learn more.

The final five finalists in the Drywite Young Fish Frier of the Year Competition have been announced. The remaining five will all be trying to claim the prestigious title in the 2020 National Fish and Chip Awards.

The final five who have made it this far are: 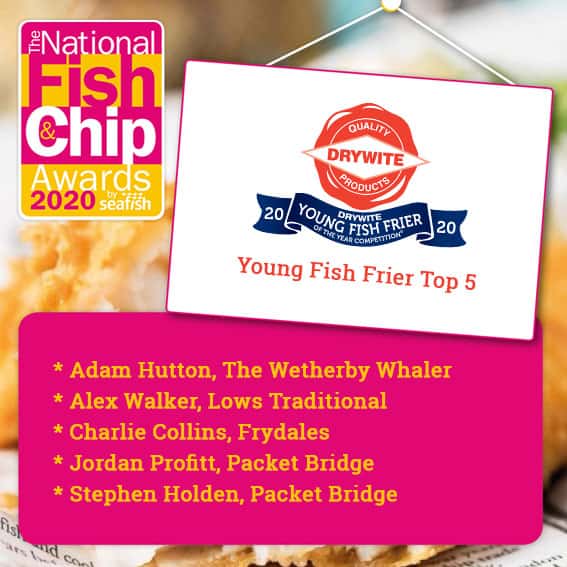 To reach the final the young fish friers have gone through intensive skill-based assessments, this includes potato chipping, making batter and frying fish. On top of this there was a personal presentation and a media interview that was completed during a comprehensive judging day, this took place at the National Federation of Fish Friers (NFFF) Training School in Leeds.

For the next stage each finalist will receive a mystery shop visit which will happen within the next few weeks. During this the fish frier will be judged in their own working environment on their practical skills. The winner of the Drywite Young Fish Frier of the year Competition will be announced in London on the 23rd January 2020, at The National Fish and Chip Awards 2020 ceremony.

The National Fish And Chip Awards

The National Fish and Chip Awards have been going for over thirty years. These prestigious awards have continued to grow in scale and stature since starting in 1988. The awards are now seen as one of the most respected and prominent events in the UK seafood industry.

The National Fish and Chip Awards are organised by Seafish. Seafish are the public body that supports the UK’s seafood industry.